Swords of the Knights of Pythias 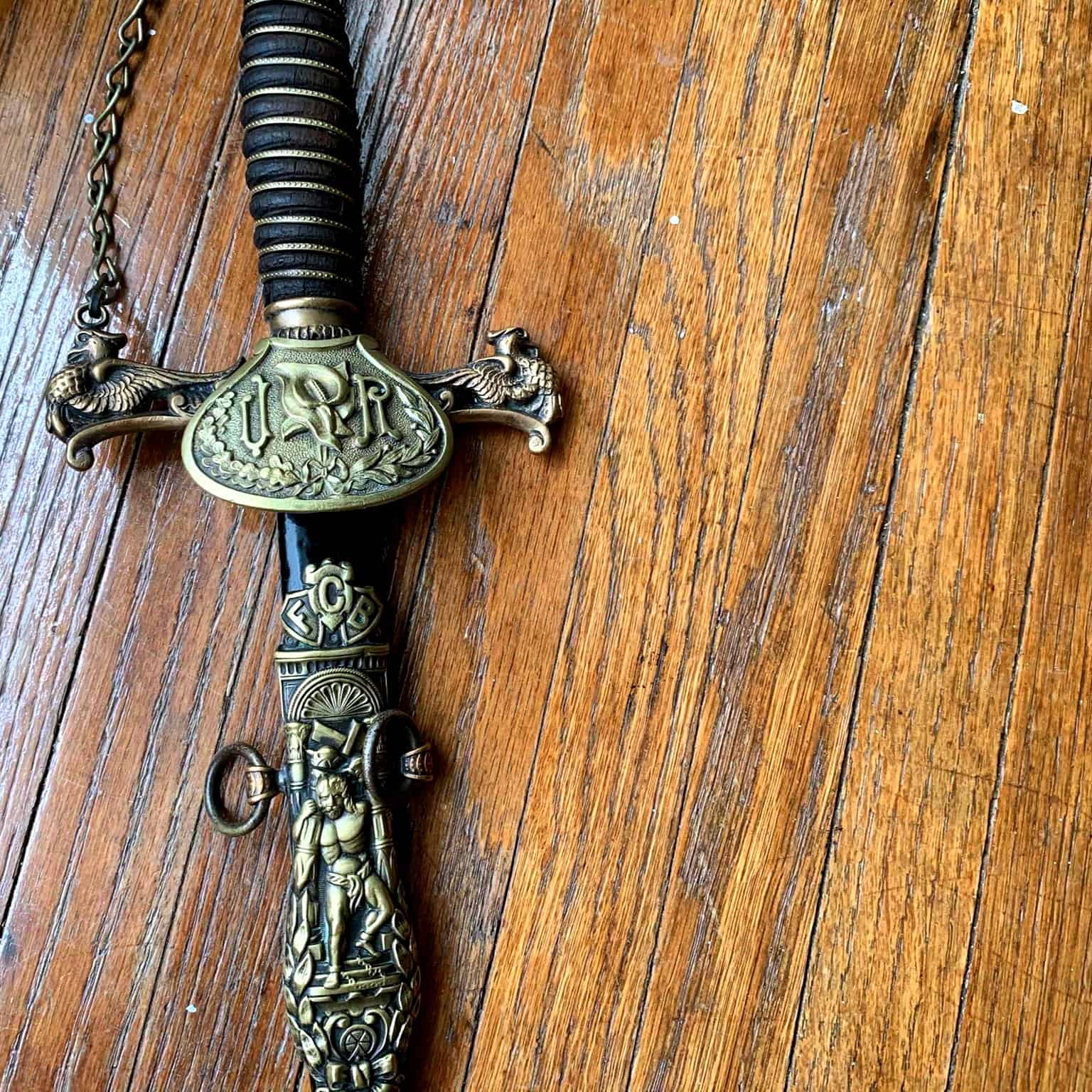 Before we explain the markings on your particular sword, let us give you a brief history of the Pythian Order. You will see how it ties in with the various scenes that are usually found on Pythian swords:

The Order Knights of Pythias was founded in Washington DC on February 19, 1864 by Justus H. Rathbone. It is based upon the story of Damon and Pythias, two very close friends during the time of ancient Greek history. Damon was sentenced to death by the tyrant king, Dionysius, and his friend, Pythias, offered to stay as a hostage for four hours so that Damon could visit his family one last time. No one expected Damon to return and face his fate, but at the very last moment, Damon, true to his word and his friend, appeared at the place of execution. The king was so amazed at this show of loyalty and trust that he freed both men. In those days, most men wore helmets, shields, swords, and a variety of weapons. That is why they are so predominant on the swords.

The inscriptions and designs vary. The only requirement is that they meet certain dimensions. The long narrow sword is used for parades and drills because it is easy to handle. The short stubby type is used whenever one has to be placed in a semi-permanent position, such as on the open Bible which is present at all Pythian gatherings. (We are a non-sectarian fraternity but we ask that all members believe in some form of Supreme Being. We do not specify any particular religion or denomination).

The Use of Swords

Swords are still used in our rituals and ceremonies but they are mainly owned by the subordinate lodges. In former times, many Pythians prided themselves in their ability to do “floor work” as we call performing during the rituals and ceremonies. The swords were individually designed and inscribed, and presented as tokens of esteem by friends and family, much as we would now give an inscribed gavel, a plaque or some other expensive gift.

The following markings are those that are commonly found on swords:

The man in the helmet with the lion on top signifies the highest rank (Knighthood). There were three steps to reach full Knighthood – Page, Esquire, and Knight. It is the same in reaching full Knighthood in our fraternity as well. The lion means leadership.

“FCB” stands for FRIENDSHIP, CHARITY, and BENEVOLENCE- the three cardinal principles of the Order to which we adhere very strongly, even today. You will see it wherever Pythianism is mentioned

On some swords, you will see the letters “U R” (not V R) which stand for Uniformed Rank. Just after the fraternity was founded, a very elite group of Pythians fashioned themselves into a militaristic type of organization. They had their own military uniforms, they referred to their lodges as military units, they called themselves by military titles, they went to “encampments” instead of conventions, and they even had their own set of rules and regulations based on that of the U.S. Army. They excelled in marching and in drills and were highly entertaining in parades. The Uniformed Rank used the Lily as its official flora and was known as the “Army of the Lily”, but the Knights use the sprig of myrtle, which signifies eternal friendship. It is placed on the casket of a brother to show that he was loved by his fellow Pythians. The Knights picture a falcon which signifies vigilance, whereas the U R used the dove as its official bird.
The Uniform Rank, Knights of Pythias, grew out of drill corps units that had been organized in the various lodges after the order was originated in1864. Bear in mind that many of the members of the Knights of Pythias were men who had been active in the Civil War and who enjoyed the disciplined way of life. In 1876, under the leadership of James R. Carnahan of Lafayette, IN, there grew a movement to consolidate these various drill corps into a separate but attached organization. In 1878, the Uniform Rank of Knights of Pythias came into legal being by action of the Supreme Lodge. The membership mushroomed. The URKP was organized completely along U.S. Army lines into Companies, Brigades, Regiments, etc.

As the veterans of the Civil War began to pass on, there was a declining interest in the Uniform Rank, and the membership began to quickly drop after the World Wars. In about 1950 one of the last national encampments was held. Shortly after that time, the Supreme Lodge of Knights of Pythias removed the Uniform Rank as an official auxiliary of Pythianism

The child, man and woman in some scenes are Damon and his family saying farewell for the last time. The scene with the man looking out of a building and the group of people exemplifies the site of the execution and the throng that was waiting for the event to start.

The man pulling down the pillars of a building is Samson of the Bible. He is mentioned in our teachings as representing strength.

There are many types of weapons shown on the different swords. The jewels and pendants which our officers wear around their necks or on their lapels during meetings show a particular instrument or weapon or combination thereof, and each officer’s rank is represented by a different symbol. The other decorations and designs have no special significance.

The words “In Esto Perpetua” can be found on some swords. That means “This will be Forever” or words to that effect.

Some swords have the skull and crossbones symbol. That signifies the mortality of man as compared to the immortality of the Supreme Being which most national fraternities ask their prospective members to believe in. We do not specify any particular religion or denomination. We stopped using that symbol many years ago.

In most cases the value of a sword is more sentimental than actual. It is priceless as a family heirloom but not very valuable on the open market. They can be found on the internet for around $50.00 to $150, depending on condition. A brand new one from the factory, with no markings at all, will now cost about $450.00 to $640.00

If you have any further questions about the sword or the Order, please contact us.